Saving injured dogs off the street

Today I was moved to tears when I saw a short news clip featuring a dog in a highway who gets struck by a car. As he lays there, another dog comes and drags him off the road using his paws. It is truly remarkable and touching– all caught on video.

Click to watch it HERE and share it with friends. It will bring a smile to your face because you see a brush of death, and simple kindness from these wonderful animals we love.

In grade school, I once had the chance to save a cat that had been hit by a car. It was at an church event, and on the playground we  spotted an unmoving cat on the street. Everyone was afraid to touch it, but it hurt my heart more seeing it not get help. I remember finding a blanket and picking it up and placing it in the kitchen counter. The other children were afraid of the bloody eye and broken paw. I don’t remember how bloody it was, just that it was almost hopeless. All I could do was wash it off, calm it and speak to her soothingly. We handed her to the care of some parents.

In the past years, I’ve picked up a couple stray dogs off the street. Here’s Dumb-Dumb, a simpleton sweet white fluffy boy who loved to snuggle. Foxy was so jealous of him! He had been living near a Car Wash for a week according to the employees there. He was covered in soot, his fur was dread locked, and he smelled really bad! Turned out he had been micro-chipped and I delivered him to his happy owners. They hadn’t seen him in six months! Here he is after his bath and haircut! 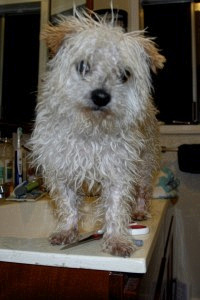 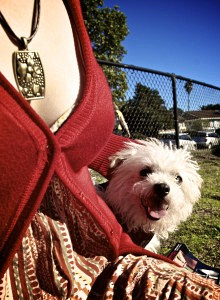 At work a few years ago, my boss came in and asked if my dog was lost. nope, Foxy was with me at the office. Turns out he had spotted a small dog running along the busy road near our warehouse. Foxy and I went out to find her. She wouldn’t approach me right away, until I let Foxy out to calm her down. This big puppy girl had beautiful light green eyes. She was a little fearful but got along with Foxy (pictured as a puppy) and the foster dog I had at the time (Nacho the Chihuahua). We took her to the local shelter where she was sure to find a home since she was an adorable puppy. 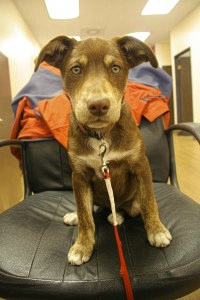 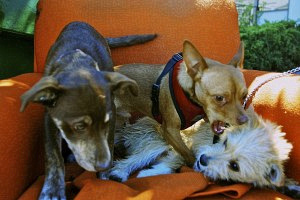 A few months ago, I saved a dog after she’d already been injured. My roommate and I were driving home from visiting the pet store when we saw a stray dog wandering in a busy six lane street. “Oh no..” we uttered together as she walked amongst the traffic and darted cars as they slammed on their brakes. We stopped the car and decided to try to capture her. She ran from us both, and when I grabbed at her, she snapped at me lightly. My adrenaline pumped as cars started pulling up behind us. I worried they’d honk, but at least they slowed down. Another woman coming from on coming traffic also stopped, got out of her car and called out to the dog. Even with treats she was hard to catch. When I finally got her we took her home and gave her a bath. Her eye was injured with the skin flipping out a little, we guessed she’d been hit already.

I immediately posted these pictures of her on Craigslist. She looked like a Corgi sized german shepherd. I called her Lola. 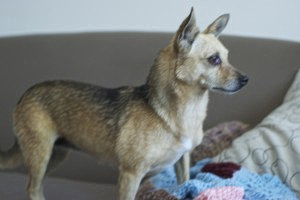 While I was at work, Lola started barking non stop. This caused the other 3 dogs in our house to also bark. It was not tolerable, and finally my roommate took Lola to the Pasadena Humane Society. The happy ending was, that although no one came to claim her, someone took interest in her from the Craigslist ad. This gentleman went to Pasadena Humane Society and tracked Lola down. Although it didn’t end the way I expected (lost dog reunited with loving family), life has a way of giving you better happy endings right? The best ones are the ones you didn’t expect!