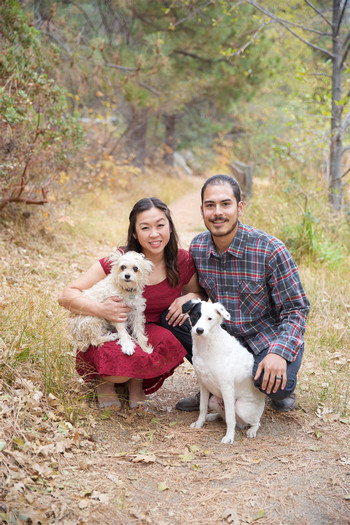 Mindy is an animal loving, nature enjoying, food loving, photographer and mother.
In her spare time she enjoys, gardening, camping, and traveling the world.
She finds joy in capturing those special moments in your life.
The best feeling is knowing those special memories are now your keepsake.


FOXY PET PHOTOS was established in 2011 by Mindy supported by her terrier Foxy. Mindy gets to know you and your pet thru discussion, playtime and downtime. Then she captures unique moments that both embody your pet’s character and convey the loving bond you share. We aim to create delightful photos you will cherish for a lifetime.

FOXY was born sometime in 2009. She was wandering the streets of King City with another pup. Someone who worked at a vet picked them up and they were put up for adoption. We named her Foxy because she looks somewhat like a fox, and she had foxy long legs. Foxy has an adorable under bite, loves to play fetch, chase birds and squirrels, and will chase cats but doesn't know what to do once she's cornered them. She loves anything stinky, and is great at catching flies and mosquitos, but not mice. She adores human food is willing to go to great lengths (roll over, play dead, speak) just to get a nibble. She is the source of great joy and inspiration.

Mindy specializes in pet photography, but is also available for family photos, portraits, weddings and events. Her photos have been used by Beagles N Buddies, Oh to Be a Dog, and published in Modern Dog magazine.

MINDY is a California girl, born and raised in Los Angeles. She enjoys laughter, the outdoors, asking lots of questions, learning new things, adventures (sky diving, scuba diving), cooking, riding motorcycles, and most of all dogs and appreciating art. Growing up on her family's vegetable farm, she spent time amongst a pack of dogs, goats, chicken, and geese. Mindy loves watching Animal Planet, nature documentaries, studying dog training, and sometimes picks up lost dogs off the street to reunite them with their owners. Her best animal experience was training and swimming with dolphins. When driving on the street, most of us look at people on the sidewalk- Mindy can't help checking out the dogs. Her dream job is to travel the world taking animal photos and making documentaries.

The road to Foxy Pet Photos thru loving art and dogs.
Mindy loved composing and taking pictures as a child at one point wanted to be a veterinarian. After finding her grandfather's fully manual Nikon camera borrowed a book from the library to learn how to use it. Her daddy taught her how to load film and hand roll the exposed film. Mindy was a big shutterbug thru high school and college. As a form of therapy, she took photos throughout the years that her grandpa and father battled cancer.


After college, she volunteered at local animal shelters, animal rescue organizations, and fostering dogs and puppies. She was successful in getting each foster dog to open up to people again which helped them to be adopted in record time. She was on a roll when she met Foxy, an intelligent, loving and sometimes defiant terrier who stole her heart. Foxy reminds us what's important in life (good food, good times, snuggles, love and not worrying too much)!

Mindy received a second hand camera and started taking pictures again. It was only natural for her to aim the camera at animals of all kinds and she discovered her best photographs were that of dogs. She had the talent and gift for pet photography. With the support and encouragement of friends and family, Foxy Pet Photos was born! It's been a blast ever since!

Mindy resides in Indio, California with her husband, toddler son and 2 dogs.